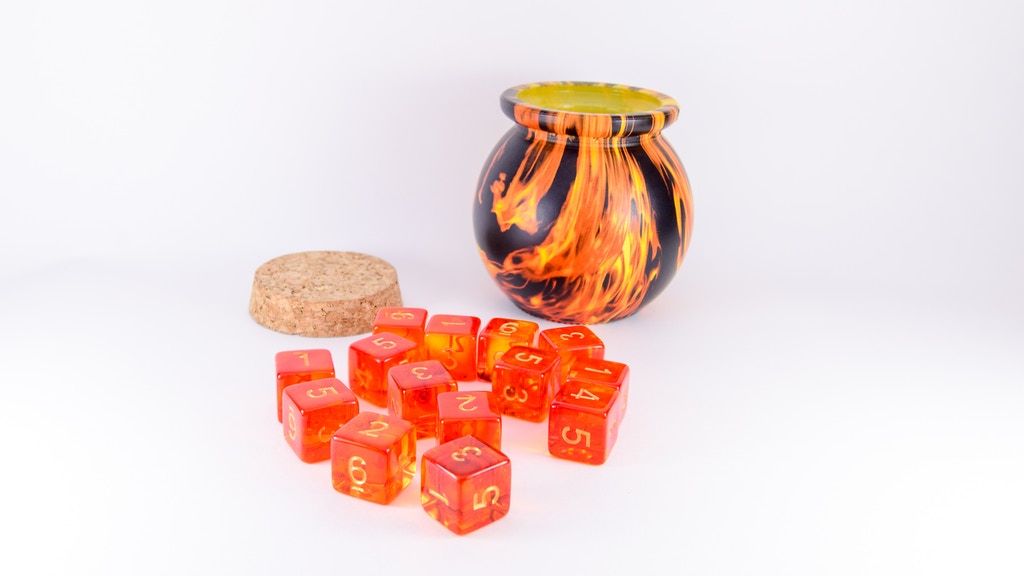 Latest Updates from Our Project:

Just a brief update to let you know that the new corks arrived last week and have been sent to the laser shop for engraving.  They should be done towards the end of this week.

As I mentioned in a comment on last week's update, we've shipped out all of the dice-only orders. About half of those have been delivered, another dozen or so are in transit here in the US, and the international orders should be arriving in another week or so. Those who are receiving their dice should have received a tracking link via email from Backerkit.


Thank you all once again for your patience, the finish line is finally in sight!

After finding out that our dice had cleared customs a week ago, I've been obsessively refreshing the tracking page on UPS several times a day. Last night, it finally paid off!

The shipment included 8 cartons, and true to form for this project 7 of them arrived...  :)

I checked on the final one and it needed an "address update", not sure why since it was all part of the same shipment, but whatever you need UPS. So that carton should arrive Monday (update - it's here).

I anxiously opened the first box and was struck by two things:

1) The dice were packed in "bricks" of 100 ea, not in bags of 14 as I had requested. This is actually OK, we'll just have to buy baggies to put them in and repack them. It actually makes sense that they shipped them like this, they can be packed much smaller than loose in bags, and since they are shrink wrapped, they wouldn't rub together during shipping.

2) At first glance, they looked a little more solid colored rather than the blend we had ordered. This proved to be just due to them being packed the way they are. (whew!) They actually have kind of a cool variation/randomness to them (my opinion anyway) and the color is different depending on how the light hits them..

I've never seen 14400 d6s at once, but it's a site to see! We actually ordered 16,000 - the rest are likely in the missing box along with the solid color dice sets we ordered.

After opening the boxes of d6s, I moved on to the sets of 7.

These were packed in sets as ordered. So all good there.

Unwrapped a set and rolled them out. They turned out every bit as good as the samples we received last year!

I've gone ahead and charged credit cards for orders that only contain dice (or just dice and healing potions). That is 47 orders that we can pack over the weekend and ship on Monday! Yay progress!

Still no arrival date on the corks (China is pretty much shut down for the Lunar New Year so they are all on vacation) - we did get an email prior to the holiday that they were shipped prior, but don't know if the freight company got them out of the country before the shut down or not.

We are also working out a plan on doing some rework to the jars to make them more durable, applying sealer and some felt pads to the bottom.

More updates as they come in.

Hello to our wonderful backers!

Just a quick update on our saga of getting these fireball jars to you.

Dusty was able to arrange replacement corks from our jar manufacturer. Luckily, he was also able to get them shipped before they shut down for the Lunar New Year. They are being shipped by air freight, so they should be here within a couple of weeks.

We received an update last night on the dice. They have cleared customs at the Port of Los Angeles as of yesterday afternoon! They have not yet been shipped to the warehouse where they will be picked up by UPS for the last mile delivery however, but that should happen next week. The ports are incredibly congested and this process has taken way longer than usual.  The ship waited over a week just to be offloaded.

We've done business with this dice manufacturer before and their quality has always been good, but we're going to be nervous until we actually have them in our hands and can inspect them...

We've been inspecting the jars one by one and sorting them and hope to be done with that process this weekend. Well over half are good, so whew. That said, there are a significant number of them with defects. Those fall into one of three categories.

1 - Film is actively peeling, usually from apparent contact with other jars during shipment. - These are unusable. We're setting them aside. We may be able to peel the rest of the film off and reuse them for something else.

2 - Film is "stretched" allowing the yellow backing to show through. There are varying degrees of this, some are outright unusable and we'll try to peel the film off and reuse the jars for something else. Some are not too bad and may be able to be touched up. Setting those aside.

3 - Air bubbles on the bottom. The bottom of the jars are slightly concave, so it was possible for air to be trapped in there which kept the film from adhering properly. This could cause them to fail eventually. We're still working out a plan for these, but right now, the thought is that we could use a razor to cut that part of the film off, seal it, and then apply a felt pad to the bottom. This would have a couple of advantages for longevity, so we may apply the felt pads even for the jars that do not have any issues in the interest of producing a better product.

Lastly, we had spec'd that the dipping factory apply a sealer to the jars to help protect the coating. That does not appear to have been done, so we are looking into doing that ourselves.

We do not have a date we'd be confident enough to give you at this time. When the dice arrive, they will be inspected and immediately shipped out to backers that only had dice in their orders. We unfortunately cannot afford to do separate shipments of dice and jars to the rest of you. We'll provide another update when the dice come in.

We personally dislike it when projects we back are late (or in some cases have never shipped) and really didn't want to be those creators. There were several things we didn't anticipate, shipping and manufacturing delays caused by COVID, a lack of container ship availability, congested ports, and the quality issues we have to deal with, so here we are. Our deepest apologies for wildly missing the date we thought we could make. There were many lessons learned here from things we didn't experience the last time around. Rest assured we're working as quickly as we can to get these right, and out the door.

Thank you again for your patience and understanding and of course for backing the project in the first place! You're all awesome!

Hey all, so I promised to send another update when the jars were delivered and today they were!

Upon opening the first box, I was happy to see that they were double boxed and appropriately bubble wrapped. Good thing too because the boxes looked like they had seen some things.

Then I started inspecting jars

The first thing I noticed - no corks!  OK, maybe they were in one of the other 9 boxes. They couldn't have forgotten them right, we even shipped them an extra 200 to use during the dipping process.  Nope. After opening all 10 boxes, not a cork to be found. :(

There were also a few other issues that were a bit disappointing. The most obvious was some peeling on a handful of them. I had expected some quality issues, so we had ordered quite a few extra to account for this and give us stock for our store.

Slightly less obvious, but still unacceptable is that the film is too thin on a few jars.

Some others appear to have air bubbles under the film on the bottoms. They look OK, but it might be an issue for durability.

The good news is that the majority of them are good, though the defects are pretty disappointing and will require us to go through and carefully inspect and sort all of the jars we received to make sure we only send out ones that look good. I anticipate doing that over the next couple of days. We ordered way more than we needed for the Kickstarter so I am confident we'll have enough good ones to be able to fulfill the campaign.

I've already reached out to the hydro dipping company to inform them of the issues and find out where our corks are. Worst case, we can order replacements and get them here pretty quickly (they are light enough to ship via air) but this does impact our timing.

More updates as I have them.


So I don't have a firm delivery date for the jars yet, but as of 7:23PM local time tonight, UPS has confirmed that they have possession of the jars. They are less than 50 miles away! So I  expect they will be delivered early next week, probably Monday. Fingers crossed that the quality is as good as the sample we received, that no damage occurred during shipping, and that all of the boxes get here.


I'll post again when we actually have them here. Keep in mind there are still  a few steps between that and shipping, including:

- The boxes will all need to be opened, the corks removed and sent to be lasered. I'll be personally helping with that process.

- We're still waiting on the dice, though we've done business with that vendor before and they have always come through. I expect they will arrive within a week or so as well.

- Once the above is done we'll assemble and ship immediately. Much later than we would have liked to have been but we're getting there!


More updates to come in the next few days. I will be locking orders this weekend, so if there are any last minute changes you would like to make, now is the time.


Thank you all so much for your patience!